She Rescued Him On His Execution Day. 11 Years Later He Saved Her From A Deadly Fire

Tony the Cat was in a Kill-Shelter – animal shelters where the rescued cats are killed after a certain time – when his life changed forever.

On the day of his execution by lethal injection, Ms Robin Lawson, a lady with a heart of gold, came to the shelter and rescued Tony.

Tony lived a nice comfortable life with Ms Lawson for 11 good years until a serious incident nearly killed the two of them. One night the house was on fire and Ms Lawson was sleeping in the bedroom, blissfully un-aware of the fire raging in the house. Had she continued to sleep, she might have died from smoke inhalation.

Tony never forgot how his Cat-mom had saved him from certain death, so now, it was his duty to save hers.

Tony kept meowing loudly until Ms Lawson woke up and called 911 who sent the fire-fighters. The fire-fighters rescued both Tony and his Mom and took them to safety outside their home.

Watch how it went down in this video!

Tony the Hero Fire Cat was honored at the Fire House a few weeks after he made a full recovery from burns on his paws and belly in the fire. 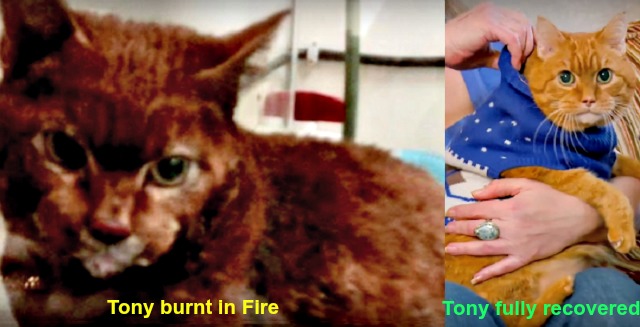 Here at #Pawpurrazi, we are also awarding Tony virtually with the #MeowhammadAli Medal of Bravery.